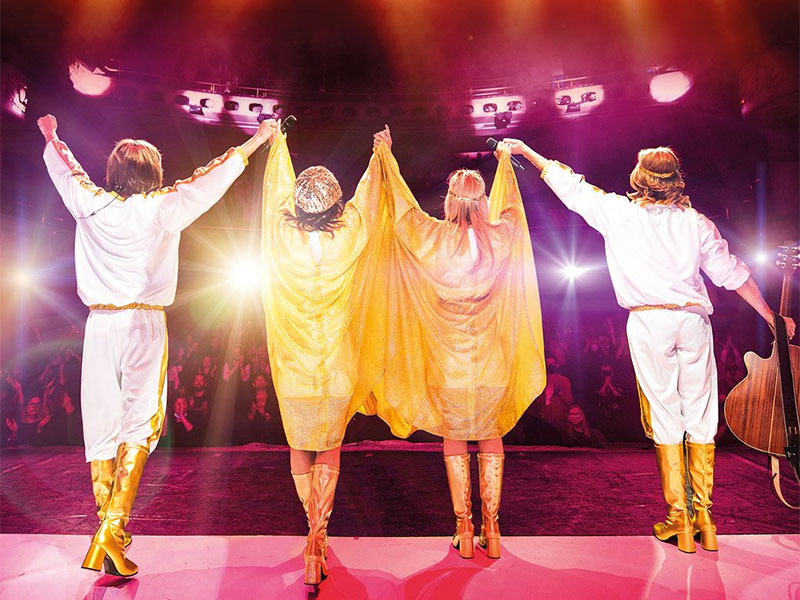 From London’s West End to Las Vegas, MANIA the ABBA tribute (Formerly ABBA MANIA) remains the world’s No. 1 touring ABBA tribute show. Formed in 1999, this production has sold out theaters and concert halls across the globe, with over 3,000 live concerts in over 30 countries, bringing the music of the beloved Swedish supergroup to 3 million people.

In an exhilarating, two-hour recreation of one of ABBA’s most memorable concerts, MANIA brings to life the flamboyance of the ‘70s. This includes all of the uplifting, dance-inducing and sometimes heart-breaking songs from the iconic Swedish band, with fantastic costumes, staging, lighting and effects.

MANIA recently toured the United States for the 10th time with an impressive 37-date national tour, selling over 50,000 tickets and visiting 18 states.

For lifelong ABBA fans, as well as new generations who never had the opportunity to see the band live, MANIA provides the perfect excuse to party, relive memories and simply feel entertained with the best music ever.

So dig out those platforms, dust down those flares and enjoy all your favorite hits, including “Mamma Mia,” “Voulez Vous,” “Dancing Queen,” “Winner Takes It All,” “Waterloo,” “Fernando,” “Super Trouper” and many more.

Each playing the roles of ABBA’s famous band members, the talented cast members in the touring United States production include:

Alison Ward (Agnetha)
Originally from Liverpool, England, Ward has performed as a vocalist throughout the United Kingdom, including at Her Majesty’s Theatre in London. She went on to sing as lead vocalist in a show at the New York-New York Hotel & Casino in Las Vegas, and she remains a Las Vegas resident to this day. Ward has also performed with every major cruise line worldwide.

Hana Keala Freeman (Frida)
A graduate of the University of Nevada-Reno, Freeman is a Los Angeles-based actress, singer and dancer. She has performed for Tokyo Disney and toured the world in productions on cruise ships, and also performed in Off-Broadway productions “50 Shades the Musical Parody” and “Sista’s the Musical.” She has performed with hit Broadway national tours such as “Ghost the Musical” and re-joins the Abba Mania family for her second tour.

James Allen (Bjorn)
Raised in Sydney, Australia, Allen has performed in numerous leading theater productions, such as “Les Miserables,” “West Side Story” and “Jesus Christ Superstar.” He has served as a guest entertainer on numerous cruise lines, and also lived in Las Vegas for several years while performing in “Donn Arden’s Jubilee.”

Jeff Pike (Benny)
As a vocalist, keyboardist and guitarist, Pike has performed many different musical styles in his three decades as an entertainer. A native of Atlanta, Georgia, he just recorded two new albums scheduled for release in 2022 and 2023.