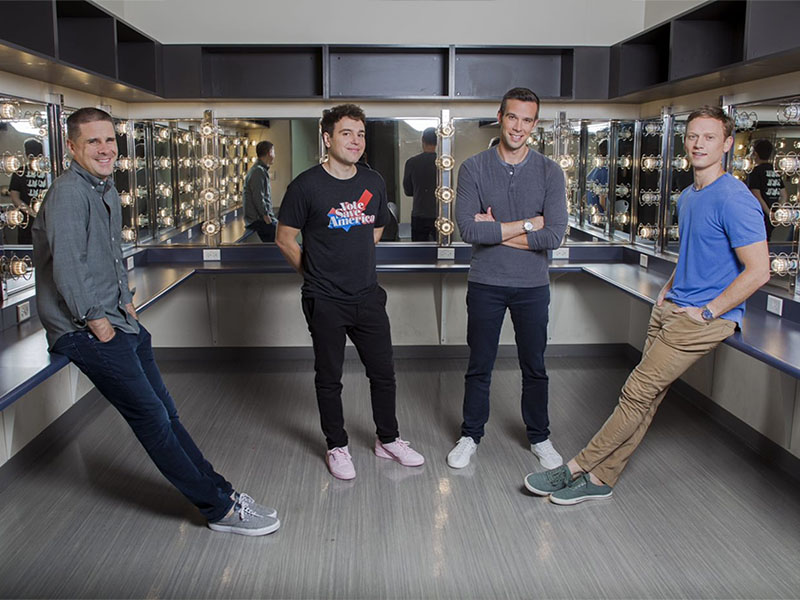 The Pod Save America: (A)live And On Tour show at Paramount on July 22 has been moved to The Moore Theatre, Thursday, July 21 at 8:00 pm. There is nothing you need to do as your tickets will be valid for the new venue and date. Additional tickets available for sale. We’re excited to see you there!

Jon Favreau served as Barack Obama’s head speechwriter from 2005-2013, a role that was far more senior and influential than Jon Lovett’s. Since leaving the White House, Favreau has written and spoken about politics and speechwriting to audiences throughout the world. In 2017, he co-founded Crooked Media, where he’s a co-host of Pod Save America and host of The Wilderness. Jon grew up outside of Boston, graduated from the College of the Holy Cross, and now lives in Los Angeles with his wife Emily and their dog Leo.

Jon Lovett is a former presidential speechwriter, as well as a TV writer, podcast host, and straight shooter WIDELY respected on both sides.In 2017, he founded Crooked Media with Jon Favreau and Tommy Vietor, to build a progressive media network with shows, analysis, and sweet, sweet content that informs, entertains, and inspires action. There, he co-hosts “Pod Save America” and hosts “Lovett or Leave It,” two of the most popular political podcasts in the country. Before Crooked, he served as a presidential speechwriter in the Obama White House, co-created a comedy on NBC called “1600 Penn” (which was cancelled after one perfect season), and wrote speeches for Hillary Clinton. Jon was also once named “Washington’s funniest celebrity” before he left the nation’s capital forever.

Tommy Vietor is a cofounder of Crooked Media, cohost of Pod Save America, and the host of the foreign-policy focused Pod Save the World. In a past life, he worked for President Obama for nine years, including a stint as White House National Security Spokesman. Originally from outside Boston, Vietor now lives in Los Angeles with his wife Hanna and their dog Lucca. He tweets too much.

Dan Pfeiffer, Co-host, Pod Save America - Despite several members of the Morning Joe panel calling for his firing, Dan Pfeiffer served President Obama for eight years as his Communications Director on both the 2008 Campaign and in the White House and finally as Senior Advisor to the President. He is a CNN Political Contributor and the author of Yes We (Still) Can: Politics in the Age of Obama, Twitter, and Trump. Dan was born in Delaware and has been banned from traveling to Russia by Donald Trump's friend Vladimir Putin.