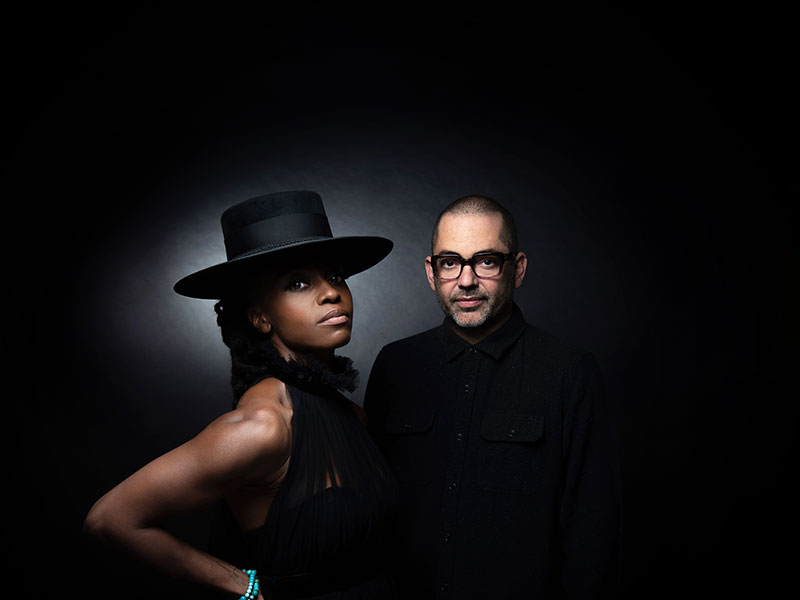 In March 2020, Skye and Ross were nearing the end of another long tour -they can go years without visiting the same country twice - and the diarysuddenly emptied. The pair are used to spending most of each year onthe road. Once, they’d only play countries where their record companyhad an outpost. Now, they can see from the streaming platforms wherepeople are listening and travel there to play.

“Cape Town was amazing,” remembers Ross of their 2018 South Africangig. “We played at the beautiful Kirstenbosch Gardens in Cape Town withTable Mountain as the perfect backdrop. We had 5,000 people all singingalong. North Africa, central America too. We try to get around the worldas much as possible and love playing new places.”

Tourbus parked, they began writing what became their tenth album‘Blackest Blue’. By December 2020, they’d finished 10 lustrous new songstouching on disintegrating familial and romantic relationships, love andkinship, the world around and the consolations of cannabis. On tour,Morcheeba is Skye (vocals), Ross (guitar), Dom Pipkin (keys), Skye’shusband Steve Gordon (bass) and Skye’s eldest son JaegaMckenna-Gordon (drums). In the studio it’s mostly just Skye and Ross - heplays guitar, lap steel, bass, keyboards and percussion. Skye startedplaying the cello during lockdown, whenever she had a little time toherself. “It’s an instrument I’ve always wanted to learn". Ross encouragedher to play it on the album and she does on ‘Falling Skies’.

Ross found lockdown idyllic at first. Writing on an acoustic guitar, sendingideas between his and Skye’s home studios in south London and Surrey.Spending time with his wife and kids, reading books about forests,psychedelic plants and quantum physics. “I had more time to play guitar,”he says happily. “It put me back in touch with feelings I hadn’t had since Iwas a teenager. When I started playing as a kid, it was a solitary thing, ameditation to transcend whatever shitty time I was going through”.

The duo let go, writing and playing what they felt like. “I had a poem I’dwritten about my free diving experience in Thailand,” Skye says about leadsingle Sounds of Blue. “‘Oh Oh Yeah’ is a song about getting stoned. Backin the day we didn’t think about singles and the ‘need to hear the chorusin 30 seconds’. You’d have seven, eight-minute songs. So we went for it.”

“We’re always trying to find a sound that already should have existed butdidn’t,” explains Ross. “A song that went missing sometime in 1969, anobscure Morricone-esque soundtrack… Skye sounds like sweet molasses,so we wanted to mix that with a gravelly male voice as a contrast.”

Falling for the rich, traditional yet modern quality of American folk groupThe Barr Brothers after seeing them live a couple of times, Ross contactedsinger Brad Barr, sharing a few ideas before alighting on a sketch of agorgeous piano ballad that became ‘Say It’s Over’. Brad came with thefirst two lines, and said “...it is fair to say it’s a breakup song…”

Then Ross was listening to the radio and heard a song so good he had topull the car over to Shazam it. “It sounded like an old Mississippi bluesrecord!” It was singer-songwriter Duke Garwood. Ross enlisted him for theclosing duet ‘The Edge of the World’. “Duke’s voice is very deep and richwhich suited it perfectly. We wanted that kind of voodoo vibe,” Rossenthuses. “He makes most of his records in the Mojave Desert with MarkLanegan but he’s from Hastings.”

‘The Moon’ is a cover originally by Irena Žilić, a Croatiansinger-songwriter. Ross fell in love with the song when they shared a bill inZagreb with Irena and asked her permission to cover it. Skye addedanother verse to it and that is where the album title ‘Blackest Blue’ camefrom.

Perhaps Skye’s gloriously unruffled vocal tone means some people don’tcatch the darkness in lyrics like; “Put your knife away, I’ve already cut myheart out”, from the album opener or the despairing; “Ain’t gonna lie, feellike I wanna die”, from ‘Killed Our Love’. There’s plenty of hurt that walkswith the hope when Skye sings.

The band saw intense protesting up close in Chile, first stop on their 2019south American tour. Skye and Steve were sightseeing in Santiago on theafternoon of the gig, moving through the estallido social, a noisy butgood-natured demonstration against social inequality. As day dimmedinto night, the protest darkened into rioting. Peaceful banging of pots andpans became soldiers firing rubber bullets and tear gas at protestors.There were already too many fans queuing at the venue to cancel the gig.And no way to get there but on foot, through the fires and riot police,past the burned-out buses blocking the roads, even though Skye’s sonwas recovering from a broken ankle. Weeks later, he’d get stopped bysecurity at Gatwick when they found traces of explosives from the riot onhis crutches. “I walked with my dress over my face,” Skye says; “our localrep was obviously panicked, which made me even more nervous. My heartwas racing, my eyes sore from the tear gas.”

Despite the chaos, the gig went well, charged by a strange and surrealenergy. By the end, all the roads around the venue were shut and filledwith armoured vehicles, so the band played on, taking requests from thefans, then everyone hung out until it was safe to leave. It reminded themthat, whatever happens in the world outside, there’s nothing like thehealing power of music to bring us all together.

When Skye was writing lyrics for ‘Falling Skies’, she was thinking abouther family, Black Lives Matter and the very white village they’ve made ahome in. “I don’t know if it was paranoia,” she says; “but I looked atpeople and wondered, do you hate black people? It made me a lot moreaware of where I was living. Having chats with the other black family inthe village, wondering if we should move somewhere that had morediversity.”

Skye was brought up by white parents in East London, supposedlytemporarily, but she was never able to go back to her biological mum. “Iwas six weeks old when I came to my foster parents.” Skye had a happychildhood, although growing up in a white family made her aware of racein a way that most children never are. “I always felt like apologising forbeing black,” she remembers. “Wanting not to alienate white people. Iwas a quiet child growing up. Studying fashion helped to bring me out ofmyself.”

It was 1994 when Ross met east Londoner Skye at a party, she ended updating his mate who mentioned that Skye could sing. Skye was not happyabout it. “Why did you tell them I could sing?!” Her only experience was alocal singing class, some backing vocals in a funk band, and one try atbusking in Covent Garden. She wasn’t ready to sing into a microphone, orin front of people - but it was a chance remark that changed their lives.Ross and his brother Paul wrote and recorded their debut single ‘TriggerHippie’ with Skye which effectively started the group Morcheeba as a trioand got them an indie record deal. They released the acclaimed debutalbum ‘Who Can You Trust?’ in 1996 and inevitably started playing livewith a first gig at The Jazz Cafe in London.

Over the next few years the band went global with ‘Big Calm’ (1998),‘Fragments of Freedom’ (2000) and ‘Charango’ (2002) and the brillianceof signature songs ‘The Sea’ and ‘Rome Wasn’t Built In A Day’. Theyproduced an album for Talking Heads legend David Byrne, got filmsoundtrack work from Morcheeba fan and Oscar-winning director StevenSoderbergh and in 2003 were the first western band to do a full tour ofChina. But Skye was ousted from the band that year when Ross’ brotherDJ/producer Paul wanted to change direction, and she didn’t feature on‘The Antidote’ (2005) or ‘Dive Deep’ (2008).

Meanwhile, Ross moved to LA in 2006 and built a studio in the HollywoodHills for recording with Morcheeba and soundtrack productions. “I spent alot of time out in the desert taking psychedelics and living out some acidrock fantasy,” he concedes. After releasing two solo albums ‘Mind HowYou Go’ and ‘Keeping Secrets’, Skye agreed to return to Morcheeba in2009. The albums ‘Blood Like Lemonade’ (2010) and ‘Head Up High’(2013) followed. Paul then left in 2015 turning the band into a duo.

Since then the pair have become closer and they got back to work, firstmaking an album as Skye & Ross, then ‘Blaze Away’ (2018) as Morcheeba.“The connection we have now is great,” Skye reveals. “We understandeach other, and we’re both hard working. Our agent might say, ‘oh it’s agruelling schedule, sometimes five gigs in a row…’ and we’ll bothimmediately say YES!”

Ultimately, "Blackest Blue is about finding a way through the darkest oftimes and emerging the other side changed but intact."