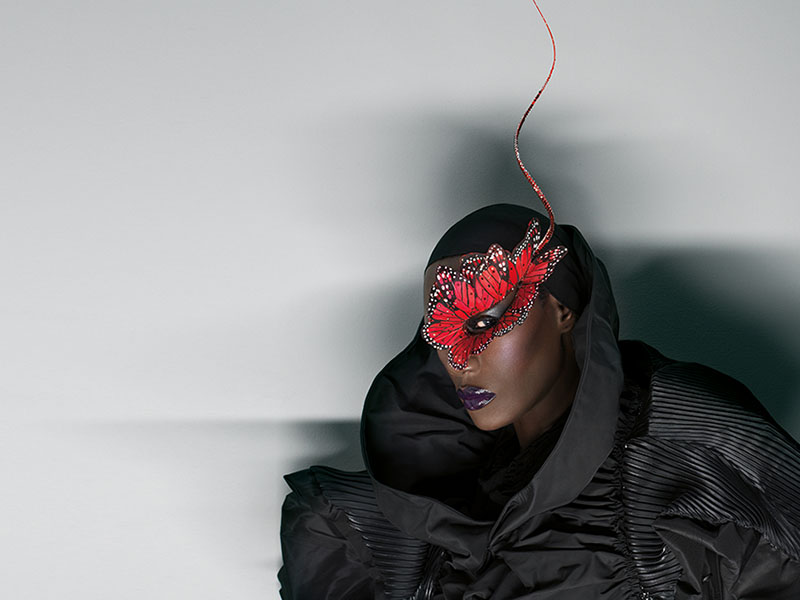 Grace Jones as singer, actress, author, traveller, artist and revolutionist has been a shape-shifting trouble-making meta-presence in the entertainment universe since her emergence as a model in New York City and Paris in the early 1970s.

Relishing the dangerous possibilities of late 1970s New York, her highly provocative often riotous shows in downtown lofts and nightclubs saw her crowned as Disco Queen with attitude and celebrated as an ultimate Gay Icon. Grace became one of the most audacious and unforgettable characters to emerge from the legendary Studio 54 nightclub in Manhattan, creating pioneering disco classics such as ‘I Need a Man’ and the enduring ‘La vie en rose.’ She was a pivotal streetwise part of a community of iconoclastic artists that included Andy Warhol and Keith Haring. Her adventurous visual work as subject, image and collaborator with conceptual artist/designer Jean-Paul Goude achieved mythic status. And no-one wore the surreal clothes of Issey Miyake quite like Grace Jones.

The 2008 Hurricane album and her 2014 New York Times best-selling memoir I’ll Never Write My Memoirs dived deep into her extraordinary life and mind – both looked forward as she looked back at how she rejects her strict religious up-bringing in Jamaica, drops out and drops acid in hippie communes with Timothy Leary, hunts for adventure, lives to perform, answers to no-one and invents her own holy and hedonistic form of futuristic show business.

In 2022, still seeming to be no age at all, occupying her own mutant time and space, she curated the famous Meltdown festival at London’s Southbank Centre and materialised as stand out headliner on the all-star cross-genre Beyonce album Renaissance, supernaturally generating some permanent attention on ‘Move.’ As the New York Times says, by inviting Grace into her world to swap histories and combine imaginative energy, Beyonce acknowledges Grace’s ‘bounteous musical might’ and confirms how ‘pop music has been tattooed with Jones’s influence for 45 years.’