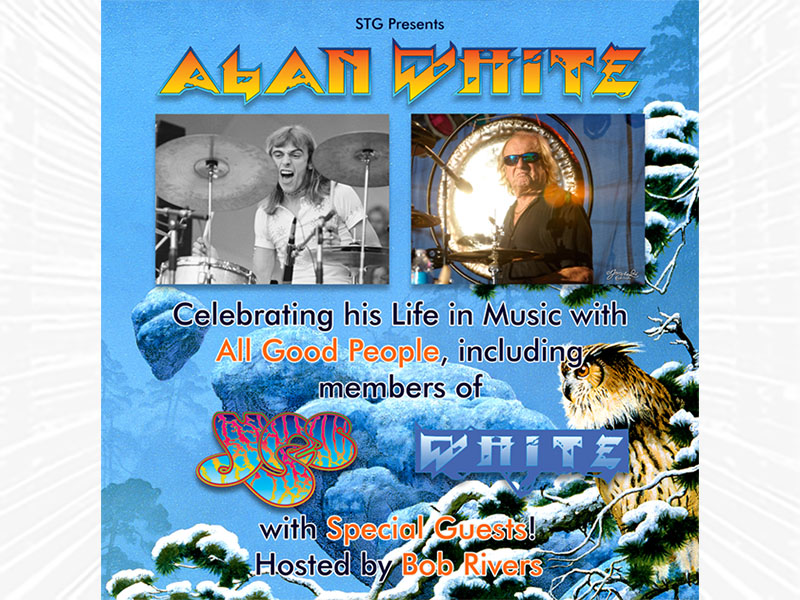 October 2, 2022 | The Paramount Theatre
Get Tickets

On Sunday, October 2, 2022, members of YES and WHITE will come together at Paramount Theater in Seattle, Washington to celebrate the musical life of legendary drummer, Alan White. The bands will be joined by special guests and will play selections from Alan’s seven-decade career, including music from John Lennon and George Harrison, YES, and more! Hosted by Alan’s longtime friend, Bob Rivers, proceeds from the show will benefit WhyHunger, a leading anti-hunger nonprofit organization Alan supported through his life.

Musicians who will join the musical tribute include:

Alan White, passed away at the age of 72 at his Seattle-area home on May 26, 2022, after a brief illness. Alan White was the longtime drummer for the band YES, is famously known for playing the drums on the John Lennon singles, “Instant Karma!” and Lennon’s 1971 “Imagine” album, including the everlasting hit song, “Imagine”. Alan was inducted into the Rock & Roll Hall of Fame in 2017. Throughout his life and six-decade career, Alan was many things to many people: a certified rock star to fans around the world, band mate to a select few, and gentleman and friend to all who met him. You can read more about Alan White’s career and legacy in this tribute from Rolling Stone magazine, and on his family’s Facebook tribute.

WhyHunger Founded in 1975 by the late Harry Chapin and radio DJ Bill Ayres, WhyHunger believes a world without hunger is possible. We provide critical resources to support grassroots movements and fuel community solutions rooted in social, environmental, racial, and economic justice. A four-star rated charity by Charity Navigator, with highest ratings for excellence in fiscal management accountability and transparency, WhyHunger is working to end hunger and advance the human right to nutritious food in the U.S. and around the world. Ninety-one cents of every dollar raised goes directly to programmatic work. Learn more at whyhunger.org and follow us on Facebook, Twitter and Instagram.