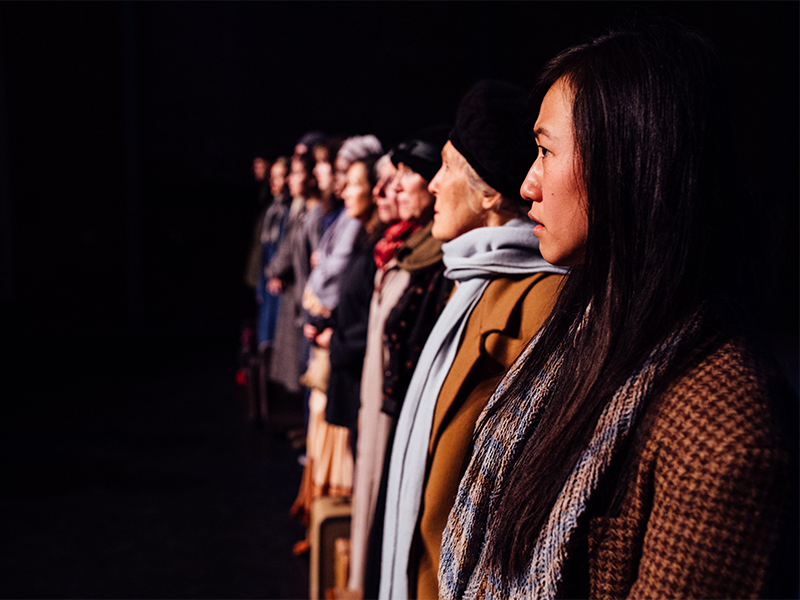 The Actors' Gang - The New Colossus

STG Presents The Actors' Gang - The New Colossus at The Moore Theatre February 20 - 22, 2020 as a part of our 2019-2020 performing arts season. Each performance will be followed by a talk back discussion, led by director Tim Robbins.

Written by The Actors’ Gang Ensemble and Tim Robbins

In The New Colossus, 12 actors from all over the world are telling their ancestors’ stories in 12 different languages and 12 different eras, all woven into a single narrative about escaping an oppressive homeland, drawn to the beacon above Ellis Island. An intensely physical production, with live music, poetry and kinetic movement, The New Colossus is an homage to the strength, resilience, and dignity of the immigrants and refugees that risked their lives to find a better life.

“I live in Los Angeles, where one can only be struck by the contributions made to our city by immigrants and people who came here as refugees. The Actors’ Gang felt compelled to respond to the government’s anti-refugee and anti-immigration policies – and to tell a story that draws attention to the true nature of people that live in this country. Save for the Native Americans, all of our families came here as refugees, immigrants or slaves. The characters in the piece all seem different, from different parts of the world, traveling at different times – but the stories are remarkably the same: the common experience of all refugees is that they are fleeing some kind of oppression and moving toward safety and hopefully, freedom. Our hope is that we will be able to illuminate the courage, fortitude, and humor of all refugees, and, perhaps, our own families.”

The New Colossus shares a title with the sonnet written by poet Emma Lazarus in 1883 for an exhibit to raise funds for the pedestal for the Statue of Liberty, which opened in 1886. Even though the Statue of Liberty was not conceived as a symbol of immigration, Lazarus’ “The New Colossus” reinvented the statue’s purpose, turning Liberty into a welcoming mother, a symbol of hope to the outcasts and oppressed of the world. After each performance, the cast and the director will have an open discussion with the audience and invite them to share their stories or their families’ stories as refugees or immigrants.