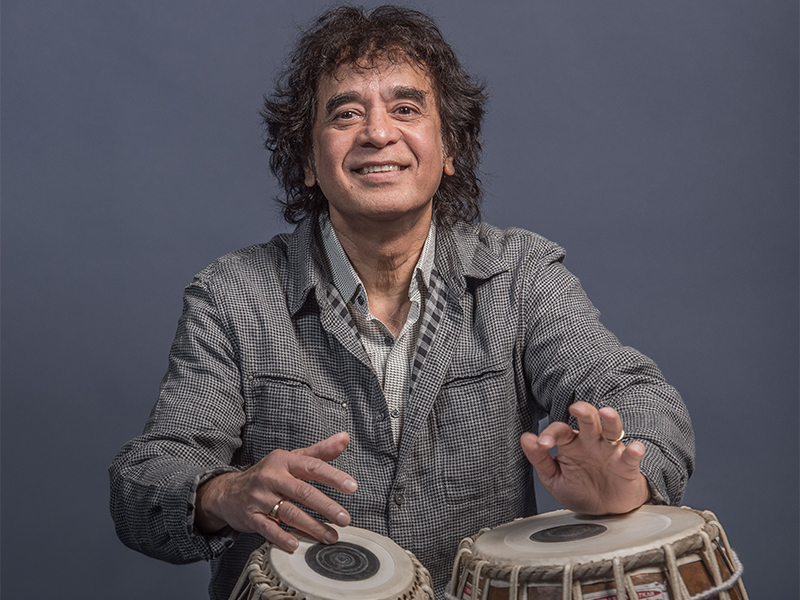 STG Presents Zakir Hussain, Kala Ramnath and Jayanthi Kumaresh at The Moore Theatre on Saturday, March 28, 2020 as a part of our 2019-2020 performing arts season.

The pre-eminent classical tabla virtuoso of our time, Zakir Hussain is appreciated both in the field of percussion and in the music world at large as an international phenomenon. A national treasure in his native India, he is one of the world’s most esteemed and influential musicians, renowned for his genre-defying collaborations.

Widely considered a chief architect of the contemporary world music movement, Zakir’s contribution has been unique, with many historic and groundbreaking collaborations, including Shakti, Remember Shakti, Masters of Percussion, the Diga Rhythm Band, Planet Drum, Tabla Beat Science, Sangam with Charles Lloyd and Eric Harland, in trio with Bela Fleck and Edgar Meyer and, most recently, with Herbie Hancock. The foremost disciple of his father, the legendary Ustad Allarakha, Zakir was a child prodigy who began his professional career at the age of 12, touring internationally with great success by the age of 18.

As a composer, he has scored music for numerous feature films, major events, and productions. He has composed two concertos, and his third, the first-ever concerto for tabla and orchestra, was premiered in India in September 2015, premiered in Europe and the UK in 2016, and received its North American premiere in April 2017, by the National Symphony Orchestra at Washington D.C.’s Kennedy Center. A Grammy Award winner, he is the recipient of countless awards and honors, including Padma Bhushan, National Heritage Fellowship, and Officier in France’s Order of Arts and Letters. In 2015, he was voted “Best Percussionist” by both the Downbeat Critics’ Poll and Modern Drummer’s Reader’s Poll.

As an educator, he conducts many workshops and lectures each year, has been in residence at Princeton University and Stanford University, and, in 2015, was appointed Regents Lecturer at UCBerkeley. He is the founder and president of Moment Records, an independent record label presenting rare live concert recordings of Indian classical music and world music. Zakir was resident artistic director at SFJazz from 2013 until 2016.

On January 15, 2018, HarperCollins India released Zakir’s long-awaited oral memoir, (available on Amazon), A Life in Music, by Nasreen Munni Kabir, the distinguished British television producer, director, and author. A Life in Music is the result of two years of intensive interviews.

Maestro Kala Ramnath with her “Singing Violin” stands among the world’s finest, most inspirational instrumentalists. Her playing has been featured on the Grammy-nominated Miles from India project, compositions of hers have appeared on the Grammy-winning album In 27 Pieces and the Kronos Quartet’s 50 For The Future. The UK-based Songlines magazine hailed Kala Ramnath as one of the 50 world’s best instrumentalists and selected the album Kala as one of its 50 best recordings. She was the first Indian violinist ever to be featured in the violin Bible, The Strad. She was the subject of a solo essay in the third edition to The Encyclopedia – Rough Guide to World Music. Her contributions are featured in Hollywood soundtracks like the Oscar-nominated Blood Diamond and many more. And, most significantly in an Indian context, in May 2017 she was awarded the most illustrious Sangeet Natak Academy Puraskar for her contributions to the violin in Hindustani Classical Music.

With her mesmerizing glides, the timing and purity of her notes, and her soulful playing, Dr. Jayanthi Kumaresh has been captivating audiences around the world for 30 years and is one of the leading veena artists today. A sixth generation musician, she began playing the veena at the age of three and is one of the youngest veena artists to receive the A-TOP grading, the highest from All India Radio.