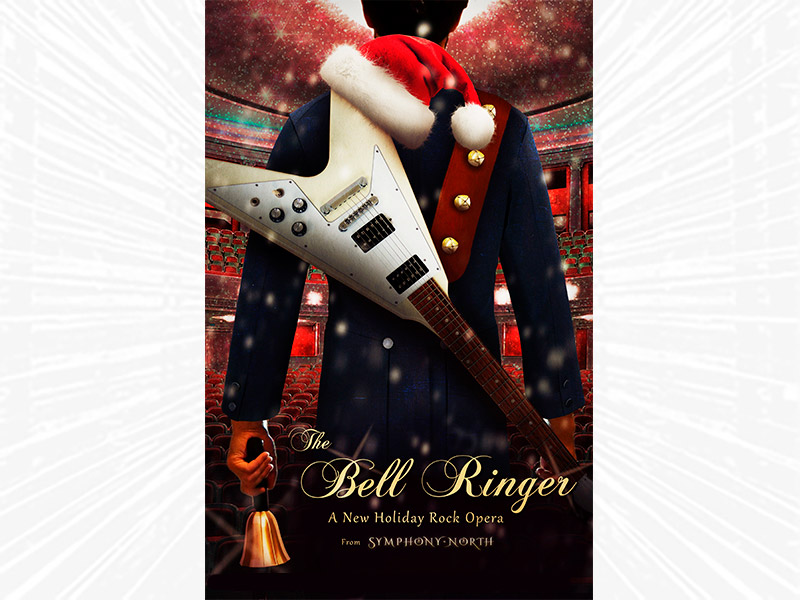 STG Presents The Bell Ringer at The Moore Theatre on Sunday, December 22, 2019.

The new holiday rock opera The Bell Ringer is coming to The Moore Theatre. The show delivers a powerful and inspiring experience combing anthemic rock music with poignant storytelling. The Bell Ringer is the debut album from Seattle-area progressive rock band Symphony North, and it relates a story that builds on the ideas of selflessness and self-worth, employing the talents of musicians hailing originally from as far as Sweden, Spain, Russia, and Turkey. Joining them are a number of local music icons, including Roger Fisher (Heart).

The show also features Jody Ashworth and Valerie Vigoda. Jody has recorded on platinum-selling Christmas rock albums; has performed in the national Broadway tours of Disney’s Beauty and the Beast, Damn Yankees, and others; and has appeared in the TV and film productions of “Sex in the City,” “Serendipity,” “Frasier,” “24,” and more. Valerie has toured with Cyndi Lauper, Joe Jackson, and platinum-selling Christmas artists; and she has co-written and starred in award-winning musicals for the New York stage, and co-written many songs for Disney (the latest of which can be heard in the cantina at Star Wars: Galaxy's Edge at Disneyland and Disney World). Her work has won the Jonathan Larson Award for Excellence in Musical Theatre, the LA Ovation Award for Best Musical, the ASCAP Richard Rodgers Award and the Off-Broadway Alliance Award for Best Musical.

Featured artists on The Bell Ringer album also include Tim Hockenberry (an America’s Got Talent semi-finalist) and Michael Lanning, as well as Dream Theater members James Labrie and Jordan Rudess (voted by Radar Music Magazine as the Best Keyboardist of All Time).

The show is raising money for the Toys for Tots Literacy Program, to give kids not just a gift to open during the Holidays, but the skills to help them build their own futures.

The Bell Ringer is a show both rock fans and families can build a new Holiday tradition around, with big performances and a poignant story of selflessness. The story of The Bell Ringer takes place on the night of Christmas Eve, when one destitute man learns, by helping others in simple but important ways, a deeper sense of his own self-worth.

The Bell Ringer composer and producer, Peter Orullian, is a former front man for legendary Seattle bands Heir Apparent and Fifth Angel, who, not many years ago, in a chance meeting, received words of personal encouragement from a number of best-selling Christmas artists, who told Orullian the world needs more Christmas stories and Christmas music, and encouraged him to get his record done.

This is going to be a must-attend holiday show, which is also raising money for the Toys for Tots Literacy Program.