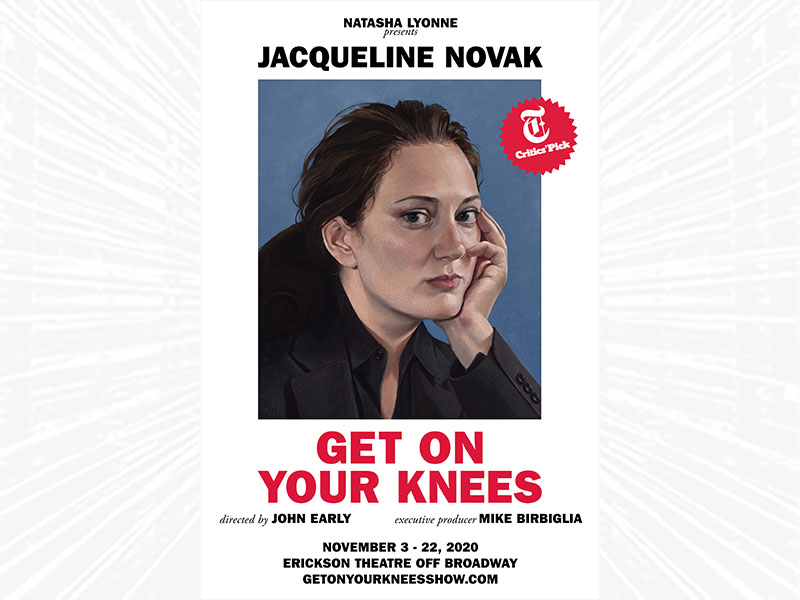 Jacqueline Novak: Get on Your Knees

STG Presents Jacqueline Novak: Get on Your Knees at Erickson Theatre from November 3 - 22, 2020.

About GET ON YOUR KNEES
Comedian Jacqueline Novak’s GET ON YOUR KNEES is the most high-brow show about blow jobs you’ll ever see. Novak spins her material on the femininity of the penis and the stoicism of the vulva into an unexpectedly philosophical show that’s part feminist outcry, part coming-of-age tale of triumph. Ira Glass calls it a “nearly Talmudic dissection of a subject. Really funny and just really like nothing else.”

"Ladies and Gentlemen, I have seen the Muhammed Ali of comedy.” - John Mulaney

“Critic's Pick! Brilliant on the absurdity of having and being a thinking, feeling, desiring, body. Shrewd, explicit, though not exactly raunchy, this is the funniest show about Cartesian dualism you will see all year!” - The New York Times

“I felt my teenage self seen and heard. I hope a lot of young women, older women, young men, older men, and also non-binary peeps of all ages see this show because it is funny and healing.” – Ilana Glazer

About Jacqueline Novak
JACQUELINE NOVAK (Writer/performer) Jacqueline Novak is a comedian whose Off-Broadway, one-woman stand-up show, “Get on Your Knees” is a New York Times “Critic’s Pick.” Recognized on two Times lists, “Best Theater of 2019” and “Best Comedy of 2019”, the show has been extended four times in New York City, along with two sold-out shows at Largo in LA. Jacqueline is a regular on “Late Night with Seth Meyers” and “The Tonight Show with Jimmy Fallon.” She has appeared on “The Late Late Show with James Corden,” HBO’s “2 Dope Queens,” “Watch What Happens Live” with Andy Cohen, and in her own half-hour stand-up special on Comedy Central’s “The Half Hour.” Jacqueline’s memoir How to Weep in Public: Feeble Offerings on Depression from One Who Knows was published by Crown in 2016 and will be available as an audiobook this year. Her TV credits include appearances on “Inside Amy Schumer,” “Animals” (HBO), and “The Characters” (Netflix). She’s written for “Broad City” and “Good Talk With Anthony Jeselnik” (Comedy Central) as well as “Soft Focus With Jena Friedman” (Adult Swim). Jacqueline grew up in Chappaqua, New York and went to Georgetown University. Instagram: @jacnov Twitter: @jacquelinenovak