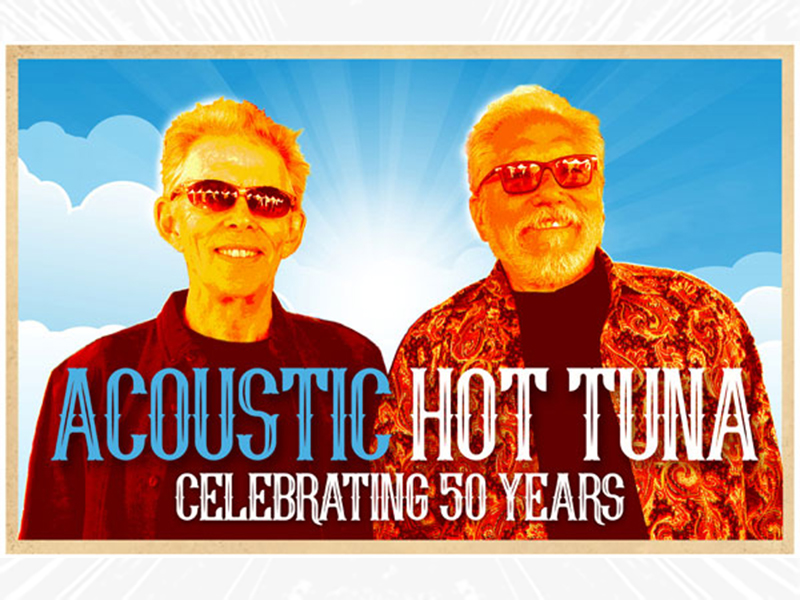 STG Presents Hot Tuna (Acoustic) at The Neptune on Friday, December 18, 2020. Tickets for the originally scheduled April 10, 2020 performance will be honored for entry!

The name Hot Tuna invokes as many different moods and reactions as there are Hot Tuna fans — millions of them. To some, Hot Tuna is a reminder of some wild and happy times. To others, that name will forever be linked to their own discovery of the power and depth of American blues and roots music. To newer fans, Hot Tuna is a tight, masterful duo that is on the cutting edge of great music.

All of those things are correct, and more. For more than four decades, Hot Tuna has played, toured, and recorded some of the best and most memorable acoustic and electric music ever. And Hot Tuna is still going strong — some would say stronger than ever.

The two kids from 1950s Washington, D.C. knew that they wanted to make music. Jorma Kaukonen, son of a State Department official, and Jack Casady, whose father was a dentist, discovered guitar when they were teenagers (Jack, four years younger, barely so). They played, and they took in the vast panorama of music available in the nation’s capital, but found a special love of the blues, country, and jazz played in small clubs.

Jorma went off to college, while Jack sat in with professional bands and combos before he was even old enough to drive, first playing lead guitar, then electric bass.

In the mid-1960s Jorma was invited to play in a rock‘n’roll band that was forming in San Francisco; he knew just the guy to play bass and summoned his old friend from back east. The striking signature guitar and bass riffs in the now-legendary songs by the Jefferson Airplane were the result.

The half-decade foray into 1960s San Francisco rock music was for Jack and Jorma an additional destination, not the final one. They continued to play their acoustic blues on the side, sometimes performing a mini-concert amid a Jefferson Airplane performance, sometimes finding a gig afterwards in some local club. They were, as Jack says, “Scouting, always scouting, for places where we could play.”

The duo did not go unnoticed and soon there was a record contract and not long afterwards a tour. Thus began a career that would result in more than two-dozen albums, thousands of concerts around the world, and continued popularity.

Hot Tuna has gone through changes, certainly. A variety of other instruments, from harmonica to fiddle to keyboards, have been part of the band over the years, and continue to be, varying from project to project. The constant, the very definition of Hot Tuna, has always been Jorma and Jack.

The two are not joined at the hip, though; through the years both Jorma and Jack have undertaken projects with other musicians and solo projects of their own. But Hot Tuna has never broken up, never ceased to exist, nor have the two boyhood pals ever wavered in one of the most enduring friendships in music.

Along the way, they have been joined by a succession of talented musicians: Drummers, harmonica players, keyboardists, backup singers, violinists and more, all fitting with Jorma and Jack’s current place in the musical spectrum. Jorma and Jack certainly could not have imagined, let alone predicted, where the playing would take them. It’s been a long and fascinating road to numerous, exciting destinations. Two things have never changed: They still love playing as much as they did as kids in Washington, D.C. and there are still many, many exciting miles yet to travel on their musical odyssey.