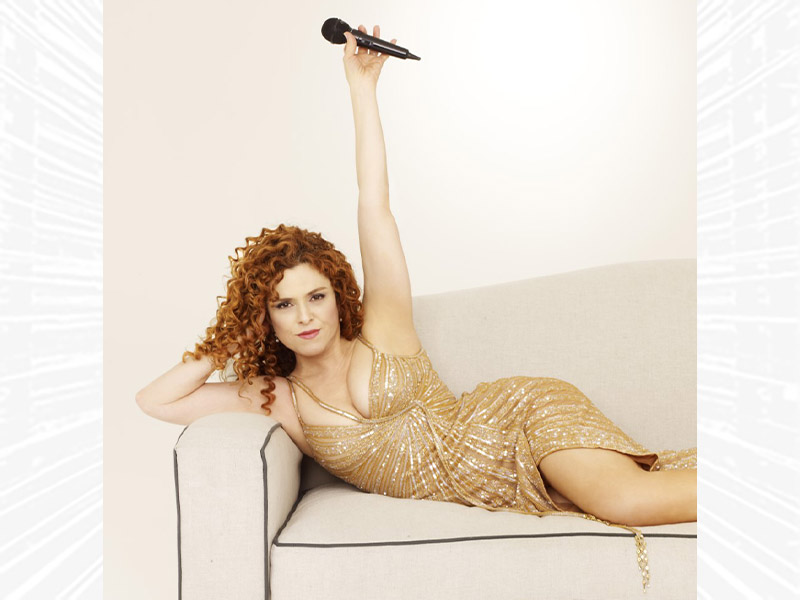 September 25, 2021 | The Paramount Theatre
Get Tickets

STG Presents Bernadette Peters at The Paramount Theatre on Saturday, September 25, 2021. Tickets for the previously scheduled September 12, 2020 show will be honored for entry!

Throughout her illustrious career, three-time Tony Award recipient Bernadette Peters has dazzled audiences and critics with her performances on stage and television, in concert, and on recordings.

She also enjoys a career which boasts an impressive list of television credits, including Amazon Prime’s highly popular “Mozart in the Jungle”, which won the 2016 Golden Globe for Best TV Comedy or Musical series. She also appears in the CBS All Access series “The Good Fight,” a spin-off of CBS-TV’s popular series, “The Good Wife.”

One of Broadway’s most critically acclaimed performers, she has garnered numerous accolades including three Tony Awards, a Golden Globe, three Emmy and four Grammy Award nominations (as well as performed on four Grammy Award-winning albums), and a star on the Hollywood Walk of Fame.

In 2012, Bernadette was honored with The Isabelle Stevenson Special Tony Award that acknowledges an individual from the theatre community who has made a substantial contribution of volunteered time and effort on behalf of one or more humanitarian, social service or charitable organizations.

Prior to that Peters added author and songwriter to her roster of achievements with her debut children’s book, Broadway Barks, aptly named after the organization she co-founded with Mary Tyler Moore. The book landed on The New York Times Best Seller list. The organization’s annual star-studded animal adoption event takes place in Shubert Alley, the heart of NYC’s theater district, and benefits 27 animal shelters in and around the New York City area. The book package includes a CD recording of an original song written and sung by the author herself. Her second children’s book, Stella is a Star features yet another of her original songs, of which all proceeds from the sale of both books go to Broadway Barks. Peters published her third children’s book, Stella and Charlie: Friends Forever that also benefits the organization. In November 2009, Peters performed a special on-night-only concert in New York City at the Minskoff Theatre, called “Bernadette Peters: A Special Concert for Broadway Barks Because Broadway Cares”, which benefitted both Broadway Barks and Broadway Cares/ Equity Fights AIDS.

In 2003, she received her seventh Tony Award nomination for her electrifying portrayal of Momma Rose in Sam Mendes’ record-breaking Broadway revival of Gypsy, and her brilliant performance was captured on the Grammy award-winning Gypsy cast recording. “Bernadette Peters is a revelation!” Ben Brantley of The New York Times declared of her star turn in the show. Peters’ Angel Records CD, Sondheim, Etc., Etc.: Bernadette Peters Live at Carnegie Hall (The Rest of It), features never-before-released highlights from her historic 1996 highly anticipated solo debut at Carnegie Hall. The concert was a benefit for Gay Men’s Health Crisis. This performance was repeated in Bernadette Peters in Concert, her London solo debut at Royal Festival Hall, which later was telecast on PBS and is available on DVD.

A native of Ozone Park, New York, Peters began her performing career at the age of 3 with appearances on “Juvenile Jury”, the classic TV game show “Name That Tune”, and “The Horn & Hardart Children’s Hour”. She made her theatrical debut in This is Goggle, starring James Daly and Kim Hunter, directed by the legendary Otto Preminger. Still in her teens, she appeared in The Most Happy Fella and The Penny Friend and performed in the national touring company of Gypsy.

Peters made her Broadway debut in 1967 in Johnny No-Trump, and in 1968 starred opposite Joel Grey in the musical George M!, earning a Theatre World Award for her memorable portrayal of Josie Cohan. That same year, she received a Drama Desk Award for her show stopping performance in the smash hit off-Broadway musical Dames at Sea, and quickly became one of the most sought-after stars in musical theatre.

Still, one of Broadway’s brightest stars, Peters received both the Tony Award and Drama Desk Award for her critically acclaimed performance in Andrew Lloyd Webber’s hit musical Song and Dance. In June 1999, Peters earned her second Tony Award, her third Drama Desk Award, and an Outer Critics Circle Award for her portrayal of Annie Oakley in one of Broadway’s most popular musicals, the Tony Award-winning Broadway revival of Annie Get Your Gun. Peters also received Tony nominations for her work in the 1992 musical The Goodbye Girl; Stephen Sondheim’s Pulitzer Prize-winning musical Sunday in the Park With George; the Jerry Herman/Gower Champion ode to the movies, Mack and Mabel; and the Leonard Bernstein/Comden and Green musical On The Town. In addition to these honors, Peters earned a Drama Desk nomination for her memorable portrayal of the Witch in Stephen Sondheim’s Into the Woods.

Best known for her work in the theatre, her career doesn’t end at the footlights. She boasts an impressive list of television credits including her guest-starring appearance on NBC-TV’s SMASH. She has also appeared in the Lifetime-TV movie, “Living Proof” opposite Harry Connick, Jr.; a guest starring role in the two-hour season premiere of the ABC-TV hit series, “Grey’s Anatomy”, and a recurring role on the popular TV hit, “Ugly Betty”. She has appeared in several performing arts specials such as PBS’ “Evening at Pops” and “The Kennedy Center Honors” to early appearances in variety shows such as “The Carol Burnett Show” and an Emmy-nominated performance on “The Muppet Show”. She appeared in the star-studded “Sondheim: A Celebration at Carnegie Hall” and also played an opera diva-on-the-verge-of-a-nervous-breakdown in Terrence McNally’s “The Last Mile”, both for PBS’ highly acclaimed Great Performances series. Other television credits include PBS’ “Hey Mr. Producer!: the Musical World of Cameron Mackintosh” and the ABC-TV special “Quincy Jones: the First 50 Years”.

Peters received an Emmy nomination for her performance in the FOX-TV hit series “Ally McBeal”. She portrayed the wicked stepmother in “Cinderella” with Brandy and Whitney Houston, and also starred in “The Odyssey” starring Armand Assante, “David, Fall From Grace” and “The Last Best Year” with Mary Tyler Moore. She also appeared in the Showtime movie “Bobbie’s Girl” (Daytime Emmy nomination) and “Prince Charming”, a TNT movie co-starring Martin Short and Christina Applegate.

Peters recorded the original title song for the 1998 feature film “Barney’s Great Adventure: The Movie”, written by famed Tony Award-winning Broadway composer Jerry Herman (Hello, Dolly!, Mame). She can also be heard as the voice of “Sophie” in the feature film “Anastasia”, as “Angelique” in the special home video “Beauty and the Beast: Enchanted Christmas”, as Sue in “The Land Before Time: The Great Longneck Migration”, and the voice of Rita the Cat in the popular Steven Spielberg animated program, “Animaniacs”.

A performer of amazing versatility, Peters has lit up the silver screen in 17 films throughout her distinguished career. She received a Golden Globe Award for her memorable performance in “Pennies From Heaven”. Her film credits include “The Jerk” with Steve Martin, “The Longest Yard” with Burt Reynolds, “Silent Movie” with Mel Brooks, “Annie” with Carol Burnett, “Pink Cadillac” with Clint Eastwood, “Slaves of New York” with Mercedes Ruehl, Woody Allen’s “Alice” with Mia Farrow, “Impromptu” with Hugh Grant and Mandy Patinkin, “It Runs in the Family”, starring opposite Kirk and Michael Douglas and “Coming Up Roses” with Rachel Brosnahan.

During her distinctive career, she has been acknowledged and honored by such esteemed organizations as the Animal Medical Center, Manhattan Theatre Club, Theatre World Awards, the Drama League, New Dramatists, New York Women in Communications, the National Academy of Recording Arts & Sciences, The Actors Fund, The Police Athletic League (PAL), the City of New York, the Theatre Hall of Fame. Other honors include Harvard’s Hasty Pudding Woman of the Year and the Sarah Siddons Actress of the Year Award, among others.

Bernadette devotes her time and talents to numerous events that benefit Broadway Cares/Equity Fights AIDS, in addition to her “pet project” Broadway Barks. She resides in New York City and Los Angeles with her rescue dogs, Charlie and Rosalia.