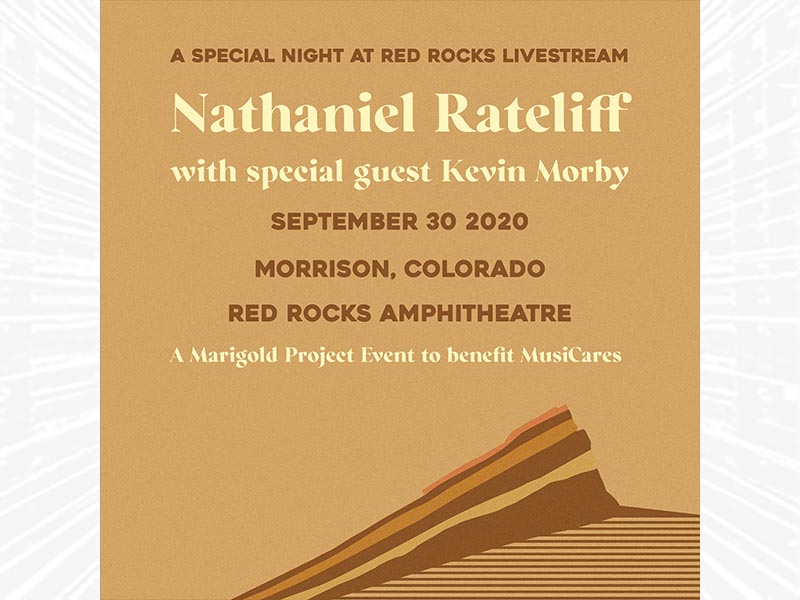 A Special Night at Red Rocks Livestream with
Nathaniel Rateliff

Nathaniel Rateliff’s “And It’s Still Alright” tour kicked off on March 2 in Minneapolis. Nine days later on March 12 the rest of the tour was canceled when the pandemic hit. On Wednesday, September 30th, Rateliff will livestream a performance at Colorado’s renowned Red Rocks Amphitheatre.

The show will feature various aspects of Rateliff’s stellar musicianship, ranging from strippedback moments with just his voice and acoustic guitar to a full 10-piece folk band accompaniment, which includes a string quartet. The event will also feature opening act Kevin Morby, who was originally scheduled to perform with Rateliff as part of his cancelled Red Rocks dates in August. Kevin Morby will perform at 8:00PM ET and Nathaniel Rateliff will perform at 8:45PM ET.

Filmed with 9 cameras, viewers will have unprecedented access to the musicians, stage and iconic venue for a full-fledged virtual event while capturing a moving performance from Rateliff’s “And It’s Still Alright” tour. The livestream event will feature custom lighting that sets stage as a beautiful backdrop captured by roaming cameras, drone footage and stark imagery of the empty venue.

“This is our way of sharing the show with everyone around the world. We worked as hard as ever to put this show together and we don’t know when we will be able to get back out there,” says Rateliff. “Whether you are on stage or in the audience Red Rocks is certainly the best place in the world to play. Our year has been strange and our future uncertain, I think the only thing we can do is try to understand each other better and love each other. It is a hard time and I encourage everyone to be open and vulnerable to those you love. They are just waiting for you.”

The Marigold Project is Rateliff's foundation dedicated to economic, racial and social justice. A portion of the events proceeds will benefit MusiCares. “MusiCares has been there for us, for our band and crew, in times of need. We honor their work and we are very glad to continue our support of this organization that cares for the broad music family,” says Rateliff.