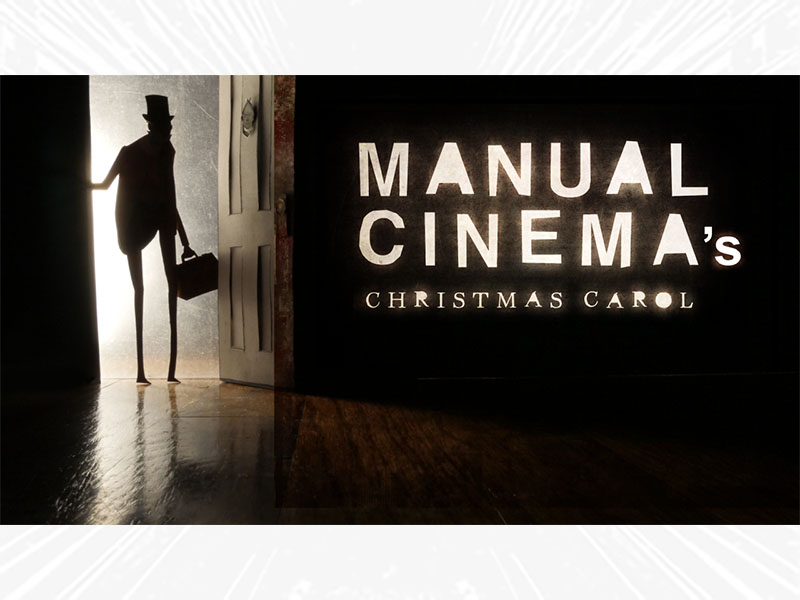 Ticket purchasers will receive an email from STG Presents on the day of the show that includes a direct link to the performance. Keep an eye on your inbox!

In this world premiere online event created for audiences of all ages, interdisciplinary performance collective Manual Cinema takes on Charles Dickens’s holiday classic with a visually inventive adaptation made to broadcast directly to your home. An avowed holiday skeptic, Aunt Trudy has been recruited to channel her late husband Joe’s famous Christmas cheer. From the isolation of her Chicago apartment, she reconstructs his annual Christmas Carol puppet show – over a Zoom call while the family celebrates Christmas Eve under lockdown. But as Trudy becomes more absorbed in her own version of the story, the puppets take on a life of their own, and the family’s call transforms into a stunning cinematic adaptation of Dickens’s classic ghost story.

World premiere performances of Manual Cinema’s Christmas Carol are December 3-20, 2020. Each show will be performed live in Manual Cinema’s Chicago studio in a socially distanced manner, and live streamed to audiences at home. The stream will be delivered by Marquee TV. In signature Manual Cinema fashion, hundreds of paper puppets, miniatures, silhouettes and a live original score will come together to tell an imaginative re-invention of this cherished holiday classic.

This program will not be available for later viewing.

LIZI BREIT (Puppeteer, Puppet Design) Lizi Breit is a Chicago-based artist working primarily across illustration, animation, sculpture, and performance. She has been working with Manual Cinema since 2011, and is currently serving as associate designer. She is an artistic associate with The Neo-Futurists and a former member of Blair Thomas & Co. Her internet self lives at www.lizibreit.com.

DREW DIR (Co-Artistic Director) is a writer, director, and puppet designer. Previously, he served as the Resident Dramaturg of Court Theatre and a lecturer in theater and performance studies at the University of Chicago. He holds a master’s degree in Text and Performance Studies from King’s College London and the Royal Academy of Dramatic Art.

SARAH FORNACE (Co-Artistic Director) is a director, puppeteer, choreographer, and narrative designer based in Chicago. She is a co-Artistic Director of Manual Cinema. Outside of Manual Cinema, Sarah has worked as a performer or choreographer with Redmoon Theatre, Lookingglass Theatre Company, Court Theatre, Steppenwolf Garage, and Blair Thomas and Co. Most recently, Sarah wrote the story mode for the video game Rivals of Aether. In 2017, she directed and edited the first episode of the web series, The Doula is IN. In 2016, she directed and devised an "animotion" production of Shakespeare's Hamlet with Rokoko Studios for HamletScen at Kromborg Castle in Elsinore, Denmark.

N. LAQUIS HARKINS (Aunt Trudy) is a graduate of Howard University. LaQuis was born and raised in Chicago, Illinois. Since her initial work with the Hip Hop Theatre Junction ( Rhyme Deferred ), LaQuis has performed in various productions including Repairing a Nation , How We Got On (understudy) and Blues for an Alabama Sky (double-understudy) and in Manual Cinema's own No Blue Memories , as well as commercials and independent films. She recently produced her first short film, Kayla's Light , about a family in Chicago dealing with tragic loss. She is grateful and honored to return to work with the magical Manual Cinema in such a delightful and modern twist on a classic.

BEN KAUFFMAN (Co-Artistic Director) is a Chicago-based composer, director, interactive media artist and co-Artistic Director of Manual Cinema. His film and interactive work has been shown at the Jay Pritzker Pavilion (Chicago), the Peggy Notebaert Nature Museum (Chicago), the University of Wisconsin and CUNY’s Baruch College (NYC). He has lectured at The Metropolitan Museum of Art's MediaLab, New York University and Parsons the New School of Design. His past composer credits with Manual Cinema include Ada/Ava , The End of TV and the New York Times documentary The Forger . He holds a Master’s degree from New York University’s Interactive Telecommunications Program (ITP).

MADDY LOWE (Costume Designer) is a costume designer, puppeteer and performer from Illinois. Past costume work includes Manual Cinema's Frankenstein , Rough House Theater's Cicada Summer, The Skin of Our Teeth and Bloomsday at Remy Bumppo, The Secretaries with About Face, and several productions at Lookingglass Theatre. When not sewing and gluing things together, Maddy co-curates Nasty, Brutish & Short , the quarterly puppet slam at Links Hall, and her original performance work has been seen around Chicago in living rooms, bars, DIY spaces, and even some theaters. Maddy is a graduate of Northwestern University and the School at Steppenwolf.

JULIA MILLER (Co-Artistic Director) is a director, puppeteer, and puppet designer. With Manual Cinema she has directed Mementos Mori and The End of TV as well as created original roles in Frankenstein (The Creature/Elizabeth), Ada/Ava (Ada), Lula del Ray (Lula's Mother), The Magic City (Helen) , and Hansel und Gretel (Hansel). In Chicago, she has worked as a performer and puppeteer with Redmoon Theatre and Blair Thomas and Co. She spent several years training in devised theatre, clown and mask with Double Edge Theatre, Carlos García Estevez and at the Accademia dell'Arte in Arezzo, Italy. She is a co-producer and director of several episodes of the web series The Doula is IN.

ANDREW MORGAN (Aunt Trudy Lighting Design ) has been working professionally as a Director, Cinematographer, and Editor since graduating from Columbia College Chicago in 2008. In 2009, started Little Cabin Films with friend and business partner, Nick Nummerdor. As Co-Director and Producer of “Vannin’” (2013), Morgan saw his first feature film go from conception to successful distribution via streaming services such as Amazon Prime. Morgan has also acted as a producer, director, and cinematographer on two short documentaries, “North Branch” (2018) and “Hill Climb” (2017), that both focus on unique aspects of Americana. His new documentary "Sleeze Lake: Vanlife at its Lowest & Best" will screen at CUFF & SFDOCS 2020. Most recently, he found himself as director of photography for Manual Cinema's shadow puppetry material to be included in the 2020 release of Monkey Paw Productions’ “Candyman” directed by Nia DaCosta.

SHELBY SPARKLE (Stage Manager) Shelby is oh so grateful to have the opportunity to work on this gorgeous production with these amazing humans during these uncertain times. Shelby has been with Manual Cinema for 4 years, stage managing several touring productions that have taken her across the United States and around the world, while also overseeing these touring operations as the company manager. Before joining MC, Shelby stage managed plays all over Chicago with companies like Sideshow Theatre Company, Lifeline Theatre, and The Strange Tree Group. She then went on to stage manage all over the country, including various experimental theatre projects with grad students at the A.R.T. Institute, school touring productions with ArtsPower, and even an opera with Dell'Arte Opera Ensemble. But nothing has brought her as much joy as working and traveling with the incredibly talented artists, puppeteers, and musicians of Manual Cinema.

MIKE USREY (Technical Director and Sound Engineer) “ That may be the most important thing to understand about humans. It is the unknown that defines our existence. We are constantly searching, not just for answers to our questions, but for new questions. We are explorers. We explore our lives day by day, and we explore the galaxy trying to expand the boundaries of our knowledge. And that is why I am here: not to conquer you with weapons or ideas, but to coexist and learn.” – Benjamin Lafayette Sisko

KYLE VEGTER (Co-Artistic Director) is a composer, producer, sound designer, and Managing Artistic Director of Manual Cinema. As a composer of concert music he’s been commissioned by such groups as The Chicago Symphony Orchestra’s MusicNOW series, The Pacific Northwest Ballet, and TIGUE. His music and sound design for theater and film has been performed worldwide and commissioned by the New York Times, NPR’s Invisibilia, Topic (First Look Media), the Museum of Contemporary Art Chicago, StoryCorps, The Art Institute of Chicago, The Poetry Foundation, Hubbard Street Dance, the O, Miami Poetry Festival, and others. His past Composer/ Sound Designer credits with Manual Cinema include Lula Del Ray, Ada/ Ava, FJORDS, Mementos Mori, The End of TV and various other performance and video projects. He has been an artist in residence at High Concept Laboratories, and co-founded Chicago’s only contemporary classical music cassette label Parlour Tapes+.