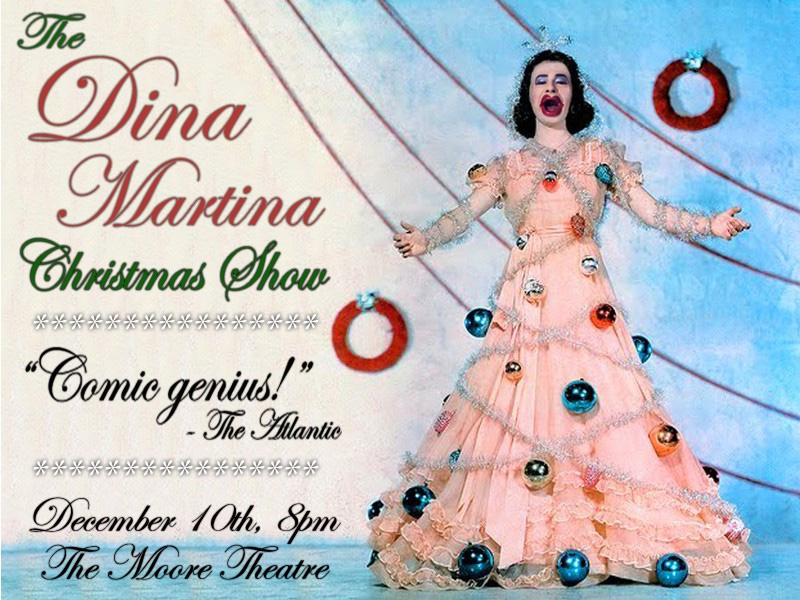 DINA MARTINA has been hailed as “Divinely funny” (Time Out London), “Painfully funny and demented” (Seattle Times) and “The most original drag performer working in America today” (Village Voice). Absolutely packed with ludicrous songs, horrifying stories and overburdened costumes, Dina Martina’s shows are impossible to adequately describe, other than that they’ve become synonymous with jaw-dropping pathos and mind-blowing comedy. What a Dina Martina show is, quite simply put, is a smart and hilarious evening of entertainment that you will never forget.

Martina is the 2012 recipient of The Stranger Genius Award for Theater, three Seattle Times Footlight Awards, and has been nominated for an Alpert Award, a SPIT Award for Best Solo Show, and two GLAAD Media Awards for Outstanding Off-Off Broadway Theater. She did not win those.

CHRIS JEFFRIES has written and composed scads of musicals, including The Fatty Arbuckle Spook House Revue and I See London, I See France (Annex and elsewhere), Vera Wilde (Empty Space and elsewhere), and Kaleidoscope Eyes: Songs for Busby Berkeley (NW Film Forum). Music/lyrics credits include, most recently, Jane Austen’s Persuasion (Taproot Theatre and elsewhere). Persuasion’s original cast recording is available for sale at cdbaby.com or to download/stream on all the things. His music for Bunnicula (Seattle Children’s Theatre) has been heard in dozens of productions worldwide. He’s created music for films and web series, and is the longtime accompanist/arranger for internationally disclaimed chanteuse Dina Martina. Chris was an inaugural recipient of The Stranger’s annual Genius Awards, and has twice been nominated for the Herb Alpert Award in the Arts.