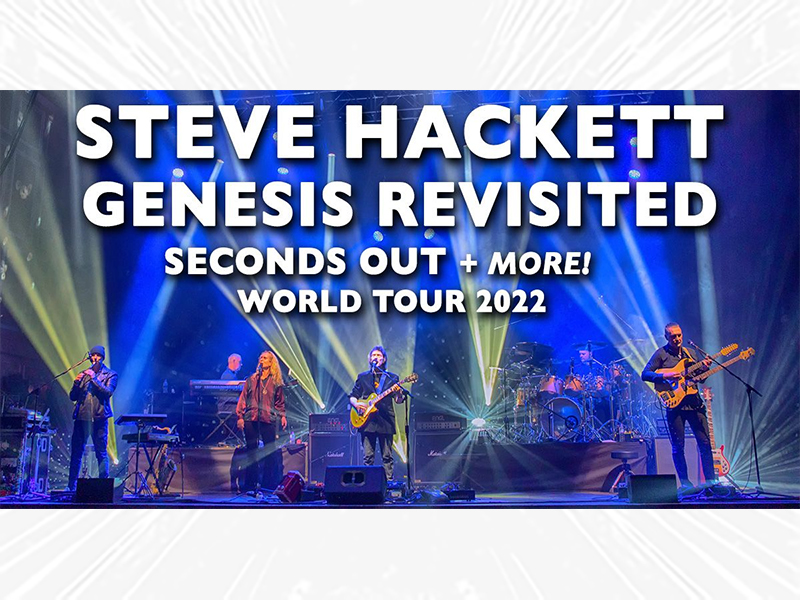 An Evening with Steve Hackett

STG Presents & Emporium Welcomes An Evening With Steve Hackett at The Moore Thursday, May 19, 2022.

STEVE HACKETT is renowned as an immensely talented and innovative rock musician. He was lead guitarist with GENESIS as part of, that produced acclaimed albums such as SELLING ENGLAND BY THEPOUND(a favourite of John Lennon). With GENESIS, Steve's guitar playing produced some of the most memorable moments, from the sensitivity of his acoustic sound on Horizons and Blood on the Rooftops to the dramatic rock guitar solos of Firth of Fifth and Fountain of Salmacis. Ashe embarked on his solo career he developed his exceptional range, pushing musical boundaries into exciting areas, exploring unchartered depths, and utilizing sounds and instruments from the four corners of the globe.

Since 2013 with the reintroduction of his album GENESIS REVISTED, STEVE HACKETT has re-ignited the passion, drama and sheer musical mastery with his highly acclaimed tours which span not only the splendid years of Genesis and their classic line up with Gabriel, Collins, Banks and Rutherford, but also a vast repertoire of his highly successful solo career which sprang to life with magical and mysterious debut album SPECTRAL MORNINGS in 1979.2019 saw the peak of STEVE’s performances with the sell out tour combining the entire albums of SPECTRAL MORNINGS and SELLING ENGLAND BY THE POUND, together with gems form his other solo works, most notably from his latest album AT THE EDGE OF LIGHT. Reviews from this tour show STEVE to be arguably at his peak of his career.

And now for 2022, following the postponements caused by the Covid crisis, STEVE is proud to announce that he will be touring the GENESIS live album, SECONDS OUT, which was recorded from their concert at the Palais de Sport in Paris, in June 1977. As is familiar with all of STEVE’s tours, this show will commence with a select variety of material from STEVE’s extensive solo career, which will set the scene for the magnificence of SECONDS OUT... all live on stage. Supported by some of the best musicians on the planet, this tour promises to surpass STEVE’s 2019 successes.

DO NOT MISS IT ! YOU WILL NOT BE DISAPPOINTED !