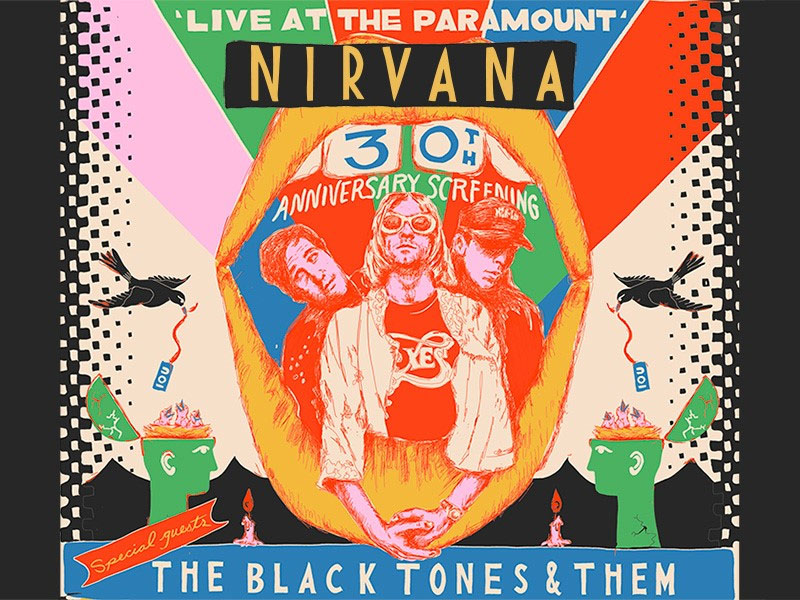 Special Guests: THEM & The Black Tones
December 12, 2021 | The Paramount Theatre
Get Tickets

On October 31, 1991, five weeks after releasing what was to become the formative album of a generation, Nirvana went on a national club and small theatre tour landing them at Seattle's Paramount Theatre for a very special homecoming show. The nineteen song set started with a riveting cover of the Vaselines' "Jesus Doesn't Want Me For A Sunbeam," then tore through the hits from their newly-released album Nevermind with "Smells Like Teen Spirit," "Lithium" and "Breed," plus earlier favorites like "School," "Love Buzz" and "About A Girl" and a very early version of "Rape Me." The Paramount concert is the only show ever shot of the band on 16mm film and mixed in 5.1 surround sound and stereo from the original multi-tracks.

On Sunday, December 12, 2021, Seattle Theatre Group (STG) will present a 30th anniversary screening of NIRVANA – LIVE AT THE PARAMOUNT. For the first time ever, the film will be shown on the big screen in full concert sound in the very room in which the show took place. STG is proud to present this incredible event as a fundraiser for YouthCare, a Seattle-based non-profit working to end youth homelessness and to ensure that young people are valued for who they are and empowered to achieve their potential. Hosted by the legendary radio DJ Marco Collins, responsible in part for bringing the grunge genre to the masses, the evening will feature live performances by THEM and The Black Tones, exclusive silent auction items including SubPop merch bundles and fine art Nirvana photography print by Charles Peterson, and a “90’s Seattle” photo booth. The event will be a celebration of Nirvana, the Seattle music scene, the important work of YouthCare, and the community’s commitment to supporting its youth who are most in need.