DANCE This is a summer training opportunity for youth and young adults from ages 13-21 to immerse themselves in dance. STG will combine our DANCE This Intensive and DANCE This Camp at Centrum into a 6-week digital series, featuring classes and teachers from both programs.

From June 27th through August 9th, we will feature rotating digital dance classes in ballet, jazz, musical theatre, hip hop, Bollywood and so much more.

Every week, two pre-recorded dance classes will be released to participants, featuring two experience levels in most classes. Learn one or both! Participants will also receive at least two free bonus sessions.

The DANCE This Digital Series offers:

(subject to change; more to be announced soon!) 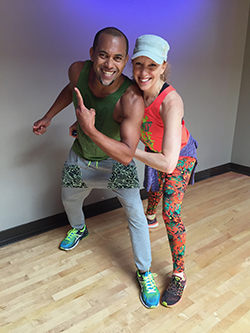 Aileen and Daniel (Afro-Brazilian and Samba)

DANIEL AND AILEEN’S (Director/Choreographer) story began in Daniel’s native city of Salvador, Brazil where they met in 2004 studying dance. They shared a dream of opening a studio which offered a place to build community and promote cross-cultural understanding through their love of dance. Daniel has been studying, performing and teaching Afro-Brazilian dance and Capoeira for 24 years and holds the rank of Mestre in Capoeira. With much enthusiasm, Daniel joyfully shares his native Afro-Brazilian culture through Capoeira and dance, two of the most significant artistic expressions of Black Brazilian culture. As a native New Yorker, Aileen began her dance training at an early age and advanced her studies at Broadway Dance Center, Steps and Phil Black. She performed and choreographed with local theatre productions and expanded her studies to include Afro-Cuban, West African, Salsa, Tango, Orixa Dance Movement and the Silvestre Technique in New York, Seattle, Brazil and Argentina. Aileen’s charisma and enthusiasm radiates her belief in dance as an art form which allows expression, joy, balance, and the cultivation of cross-cultural understanding through a common corporal language. In 2008 Daniel and Aileen married and moved to Seattle. They have worked diligently over the past 10 years to create Bahia In Motion and their Capoeira school: Moringa de Barro. In June 2012, they opened Balance Studio where they currently teach Brazilian Dance and Capoeira classes. 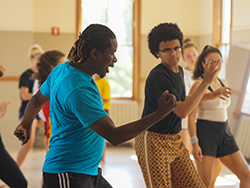 Awal Alhassan is a master dancer and musician from West Africa. Born in Tamale, Ghana and raised by a traditional drumming and dancing family, Awal has worked throughout Africa both independently, and with some of Ghana's most revered performance groups, such as: the Ghana Dance Ensemble, the National Theatre of Ghana, and the Center for National Culture Dance Troupe. Awal specializes in several percussive instruments, including Djembe, the Kpanlogo drum, the "talking drum" called Luna, and bass drums called GunGon. He began studying the music and dance of his native Ghana, West Africa at the age of five. His primary music education was with with Center for National Culture of Ghana and the National Theatre of Ghana. He now resides in the Seattle and is the founder of Sohoyini Music & Dance Company, which performs locally and internationally. Awal teaches ongoing classes, workshops, and residencies regularly across Europe, Canada, and the United States. 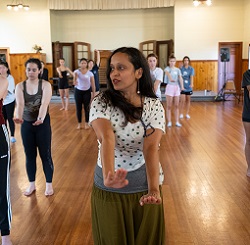 She brings in the spiritual wisdom into her teaching and nurtures the holistic growth of a student through Performing Arts. She has taught students ranging from 2 yrs old to seniors from diverse backgrounds including children and adults with special needs.

She is also a Computer Science Graduate and has had 13 years of Industry experience. Combining her longing for life with passion for arts, she has now made dance her way of life! 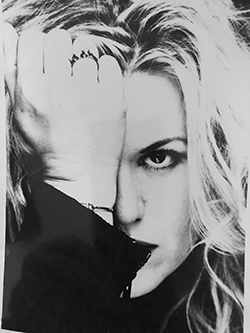 Kari-Lee Florentine, the founder and director of the elite Seattle Hip Hop Dance Company “In-Effect,"  has choreographed for artists as well as produced and directed numerous shows such as Seattle’s own hip hop production “Shameless.” She is also the choreographer/director of award-winning competition companies. Some highlights include: the Seattle production of the “The Wiz”, KUBE Summer Jam, Bumbershoot, King County Youth and Action, Choreographer/director for Seattle’s WNBA Seattle Storm, half time for the Seattle Super Sonics, San Francisco Hip Hop Festival, L.A. Underground Hip Hop, and Nordstrom, Gameworks, and Ikea. She has privately trained many dancers who have moved on to dance behind artists such as Tyrese, P Diddy, Collin, Macklemore, and Pharell, just to name a few. She is passionate and continues to dance and teach workshops. 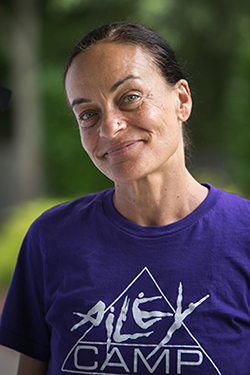 Heather Harris was born in Seattle, Washington and began her training at the Cornish School of the Arts. She furthered her studies at the Joffrey Ballet School in New York. She has studied with Joffrey, Complexions and Spectrum Dance Theater. Heather has performed with the Joffrey Concert Group, Ballet El Paso, Aluja Brazilian Dance and Spectrum Dance Theater. She currently teaches in the Spectrum Dance Theater School under the direction of Donald Byrd. She is the proud mother of two daughters and continues to teach and do dance outreach at several Seattle schools. This is Heather's 4th year as the AileyCamp ballet instructor. 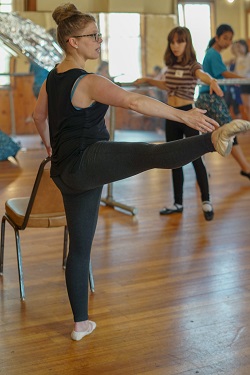 In Seattle, Kirsten has taught for many local studios and projects including Westlake Dance Center, Dance This, Global Party, Cornish Prep Program and Dance Masters of America. She choreographed and performed for the band Queensryche’s Cabaret-style Rock Concert, EnL’air, Physical Poetry and other local area dance concerts. 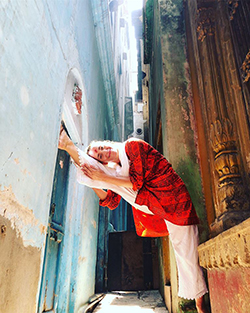 Jess graduated from Cornish College of the Arts with a BFA in dance magna cum laude after studying at Reed College and the London Contemporary Dance School. Jess has studied yoga for 20 years with luminaries Kathleen Hunt, Shiva Rea, Dharma Mittra and Mittra Rawat. In 2018 she received a grant to further her studies in Rishikesh, India. Jess teaches at Velocity Dance Center, the Gage Academy of Art and at UPrep, where she’s been on the Fine Arts Faculty for 12 years working with students in grades 6-12. For two decades Jess has danced with many notable choreographers and companies including the Seattle Opera, Pat Graney, Macklemore, Molly Scott, Rainbow Fletcher and more. In Seattle she has performed at On The Boards, Velocity, Seattle Art Museum, McCaw Hall, MoPop and Chop Suey. She has toured work to the Southern Theater, PICA's TBA Festival, the Myrna Loy Center, Dance Theater Workshop, the Joyce Theater, American Dance Festival, Colegio San Jose in Barranquilla, Colombia and the ArtDanThe Festival in Paris, France. In 2015 she performed with Mark Haim's piece This Land Is Your Land which was named "one of the most influential works in the past 15 years." -Dance Magazine. 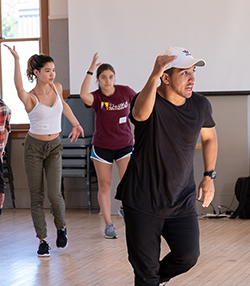 Erick "Spider" Paul, originally from Seattle, WA, began dancing at the age of 17. In 2005 he joined the group called the Young Americans where he received his training. Passionately driven he has traveled around the world performing and teaching dance. He is now currently working in Hollywood as a professional dancer. Credits include: TruTV's FAKEOFF, Dance Network's STEADY MOBBIN, Nick Cannon, Alyson Stoner, Todrick Hall, and Anjelah Johnson, NIKE, MINI COOPER, & KIA. 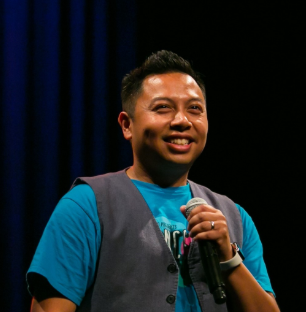