Thanks for a wonderful 19th Annual More Music @ The Moore!

Due to COVID-19, we were unable to have an audience in person at The Moore Theatre on March 13th. However, the usual 11:00 am matinee performance is available for FREE to the public via a live stream by Melodic Caring Project!

The video will soon be available on STG’s YouTube channel. View past performances now!

What is More Music @ The Moore?

The 19th annual More Music @ The Moore features exceptional young musicians mixing up diverse music styles. The performance celebrates the rich talent of youth in our community and provides musicians, regardless of what style they play, the opportunity to make music together. Award-winning drummer, producer, and songwriter Matt Chamberlain is returning for his 2nd year as Music Director to mentor and perform with these remarkable up and coming artists. Each year, artists get mentorship from Seattle-area based professionals as well as a world-renowned Music Director. 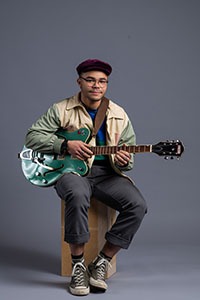 Betty Michaels is a multi-instrumentalist, producer, and songwriter with a love for any music that can vivify the soul. He has only recently started performing on guitar with Jazz/Hip Hop fusion group, Huey and the InFLOWentials (More Music @ The Moore 2018 alumni), but has been playing music since elementary school. Betty strives for authenticity in his work and yearns for listeners to really feel something –– whether or not it is expressed verbally, his music often contains within it a message of growth, gratitude, and hope.
FEATURED SONG: “Best of You” Original song 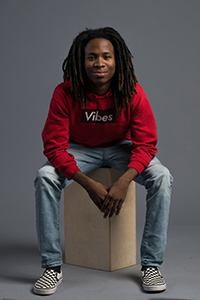 Keanon Battle is a Hip Hop/Rap artist and entertainer that can best be described as a dreamer and humanitarian. He performs under the stage name KB Tha Genius, and his debut album, “Mixed Emotions” released on all streaming platforms January 1st and has already accumulated over 20K views to start the year off. He is always seeking to expand his craft, and is currently working on a collaborative project that will consist of multiple genres, artists and concepts.
FEATURED SONG: “Prophecy” Original song 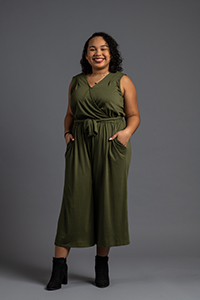 Lilliana Reid is a R&B, Soul, and Pop vocalist that has performed since the age of 12 in a range of musicals, talent shows and singing competitions, all while going on to audition for American Idol. She has competed and placed second in her high school district singing competition and has also played lead roles in past musicals. Since having incredible vocal coaching from T.J. Sullivan and performance/drama coaching from Jeannie Brzovic, both from Mountlake Terrace High School, she hopes to perfect her talent and share her voice.
FEATURED SONG: “Love All Over Me” by Monica 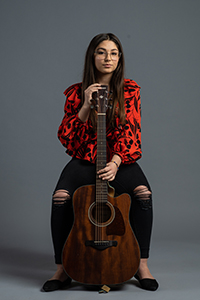 Lucia Flores-Wiseman is an up and coming singer/songwriter from Maple Valley, Washington, who blends Americana coffee house, indie, folk, and jazz vocals to create a sound that is distinctly her own. Even at seventeen years old, Lucia’s emotional performances compose mature resonances that linger with her audience. A commanding performer, Lucia continues to entertain audiences both large and small at local coffee shops, wineries, and festivals around the Pacific Northwest. She, fortunately, was able to perform with her idol, Brandi Carlile, two years ago at a benefit concert supporting the Tahoma Schools Foundation, where she was able to sing harmonies with Brandi and More Music @ The Moore 2019 alum, Benicio Bryant, as well as debutan original song to hundreds. Lucia loves to get involved with the community and is proud to have recently performed her original songs at the first Seattle TedxYouth event this past October.
FEATURED SONG: “Fear of Failure” Original song 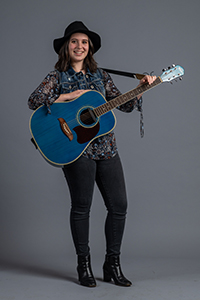 McKenzie Burkard, a Bainbridge Island based singer-songwriter, has been passionate about making music since receiving her first guitar at age 12. Her songs follow themes of growing up, navigating relationships, and finding identity. With training and support from BISA Vocal Studios, she has had the opportunity to perform at BISA New Talent Nights at Rolling Bay Hall and Earth and Vine Wine Bar. Her vocals, often compared to Natalie Merchant, are combined with acoustic guitar to tell the story of someone finding their way in life’s ever-changing landscape.
FEATURED SONG: “Louise” Original song 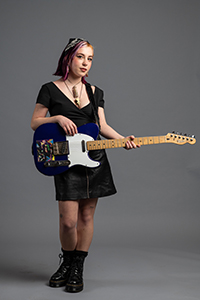 Sofia Avaria has been playing guitar, and performing for 4 years. She has taken lessons and performed with School of Rock for about 3 years, and took flamenco and jazz guitar for about a year. She has played with her band Queen Chimera at venues around Seattle such as The Rendezvous, Hale's Palladium, The Royal Room, Old Redmond Firehouse, various house shows such as Pig Pen, and Cafe Racer. Sofia was in School of Rock Seattle's Houseband, and played at venues and events around Seattle, in Chicago at Lincoln Hall, and at Summerfest, a music festival in Milwaukee.
FEATURED SONG: “Have You Ever Heard of Radiohead?” Original song 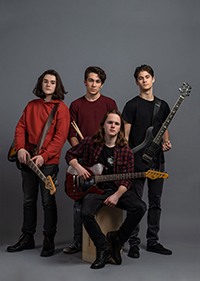 Splitting Silence is a Seattle-based hard rock band, known for captivating its audiences with dynamic and energetic performances. The band came together in 2016 over a shared passion for all-ages music. In 2019, as high school sophomores, Splitting Silence released their debut EP Out of Focus and they were selected as “Band of the Week” on KISW’s Loud and Local show. They are currently working with producer Ben Smith (former drummer of Heart) and Jonathan Plum of London Bridge Studio on new material due for release in the spring of 2020.
FEATURED SONG: “Light the Fire” Original song 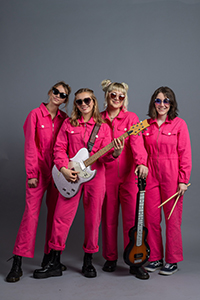 THEM is a new pop-rock project quickly gaining momentum. With mentors aplenty at their side - currently the rock musician and KEXP DJ, Eva Walker, and previous mentors such as the world-traveling drummer, Heather Thomas, Nicki Danger of Pink Parts and others - the multi-instrumentalist quartet has played local Emerald City hotspots like The Skylark Cafe and the West Seattle Summerfest. The group, comprised of four talented high school students with harmonies in spades, is set for a steady rise toward fresh and brightened musical horizons.
FEATURED SONG: “Anymore” Original song 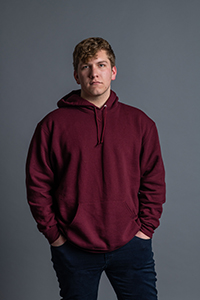 Xander Corbett is a singer-songwriter and producer from Marysville, Washington. Xander has released two full-length albums and has a string of releases to come this year. He has been performing since age twelve and performed at Seattle PrideFest 2019.
FEATURED SONG: “Light is Coming” Original song

STG’s More Music @ The Moore participants are fortunate to work with a richly talented group of mentors. Each year, we connect young artists with working professionals in the music business: from artists to bookers to marketing professionals and more.

In 2005, he made his solo debut with the eponymous Matt Chamberlain album on Trey Spruance’s Web Of Mimicry label. He then helped to create Floratone with guitarist Bill Frisell and made 2007’s Floratone 1 and Floratone 2 in 2012. In 2012 he also released his follow up solo record, Company 23 on his own Yanki Arc Record Label. Chamberlain was also a founding member of the Improvisational group-“The Slow Music Project” with Bill Rieflin (Keyboards,Electronic drums), Robert Fripp (Guitar), Peter Buck (Guitar), Hector Zazou (synths) and Fred Chalenor on bass..In 2014 he played with Soundgarden for their world tour.. In 2016 Chamberlain also released his third solo record, Comet B on his own Yanki Arc Records. 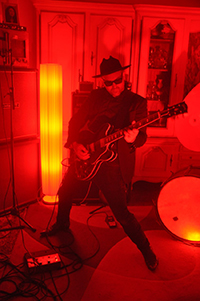 Ryan Leyva (AKA Johnny Nails) is a touring multi-instrumentalist/songwriter who focuses on producing and mixing records for various artists when not on the road. Ryan's talents can be seen and heard in over 50 countries and on hundreds of records. He currently resides in Seattle, WA. This is Ryan's 19th year with STG's More Music @ The Moore. 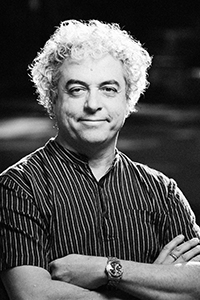 Three-time Latin Grammy nominee Jovino Santos Neto is a master pianist, flutist, composer, arranger and conductor from Rio de Janeiro, Brazil. After 15 years as a member of the legendary Hermeto Pascoal Group, he moved to Seattle in 1993. Since then, Jovino has established himself as a fascinating performer, whether playing solo piano, leading his award-winning Quinteto, or in guest appearances with ensembles and orchestras worldwide. He has shared the stage and the studio with some of the most creative musicians of our times. He is a Professor of Music at Cornish College of the Arts in Seattle. 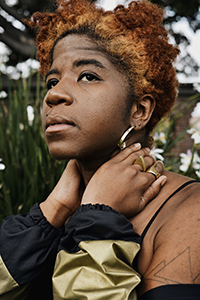 SassyBlack (Catherine Harris-White) is a singer/songwriter & producer based in Seattle, WA. While she is known for her jazz stylings over funk & soul influenced production. She is also an actress and has been seen on the screen in Martin Scorsese’s VINYL & on the latest and last season of Broad City. Recently, Sassy released her third album Ancient Mahogany Gold and when not performing, she enjoys sharing the magic of music and performance as a teacher, mentor & DJ. 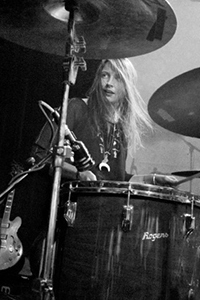 Faustine Hudson has been studying the drum for 29 years, starting when she was 8 years old. It has been a profound teacher and tool for her in connection to herself. Having spent much of her adult life as a professional touring/studio/live musician (ie The Maldives, Josiah Johnson, Chain and the Gang), her work is shifting as she deepens her own meditation practice. Faustine has dropped into the medicine of the drum intuitively, taking on projects that are fulfilling on a deeper soul level. 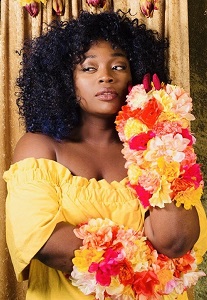 Shaina Shepherd is a singer/songwriter and vocal coach based in Seattle, WA. Known for her pervasive style as front woman to soul-grunge band BEARAXE, her notable vocal stylings have brought her into various creative spaces — from sharing stages with rock stars like Dave Matthews, Kathy Moore and Thunderpussy, to being a soloist with the Seattle Symphony. When she’s not performing, she finds fulfillment as a choir director, teacher and event producer in the Seattle music scene.

As part of Moore Music @ The Moore, young artists have collaborated and performed with:

2014-2013, with Michelle Ndegeocello as Music Director