The Neptune, 1946 - Courtesy of Museum of History and Industry

The Neptune Theatre was the vision of brother and sisters – Dr. Earl Roy Fried, Bertha Foote and Nettie Fries and has remained under the ownership of their descendants. Designed by architect, Henderson Ryan, it was first leased by the Puritan Theatre Company.

The Neptune's Interior, 1929 - Courtesy of Museum of History and Industry

The U-Neptune Theatre was a magnificent playhouse located in the University District when it opened in 1921. The only survivor of five neighborhood theaters built during the silent film era, it was a modern-day theater with seating for approximately 1,000 patrons on the main floor and balcony. Designed for the best motion picture entertainment, it contained a short stage for occasional live performances. The theatre building had offices located on the 2nd floor.

The U-Neptune Theatre had a successful opening on November 16, 1921. The Seattle Times heralded it as the “... newest photoplay palace and the finest suburban theatre in this part of the country.” The theatre’s artistic taupe and blue nautical décor depicted many sea scenes reflecting its namesake, King Neptune. The auditorium contained the largest Kimball Theater Pipe Organ on the Pacific Coast (removed in 1943) along with the most modern film projection equipment, heating, ventilation and lighting.

The Neptune's Marquee, 1946 - Courtesy of Museum of History and Industry

Theatre Modifications Reflect its Many Lessees

Throughout the Neptune’s 100-year history its interior landscape changed with the ebb and flow of its many lessees. Likewise, the marquee had endured several changes over its many decades. An interior redesign was completed in the late 20’s. Familiar management names like Puritan Theatres, Jensen-Von Herberg Theatres, Evergreen State Amusement Corp., Sterling Theatres, Landmark Theatres and its current lessee, the Seattle Theatre Group®, all had a significant impact on the venerable old movie house. It remains an example of the classic suburban theatre architecture from a bygone era.

The Neptune Readies for Live Performances

In February 2011, the Seattle Theatre Group® began the arduous process of transforming the Neptune Theatre from a single screen movie house into a performing arts destination supporting musical and comedy performances, lectures, cinema, and community-based programming. The 7-month renovation included upgrading the backstage area, exposing the original stage and proscenium, adding state of the art lighting and sound, motorized movie screen, a safety sprinkler system, improved patron amenities such as seating, restroom upgrades and beverage service. This was accomplished while maintaining the historic architectural integrity of the theatre.

On September 25, 2011 the newly renovated Neptune Theatre opened to the public featuring local musician Mark Lanegan. In honor of the theatre’s history of showing the Rocky Horror Picture Show, this was also screened on opening and is now shown annually. The 1st film shown was the Rocky Horror Picture Show. The opening celebration consisted of over 40 events with a week of free community centered engagements. 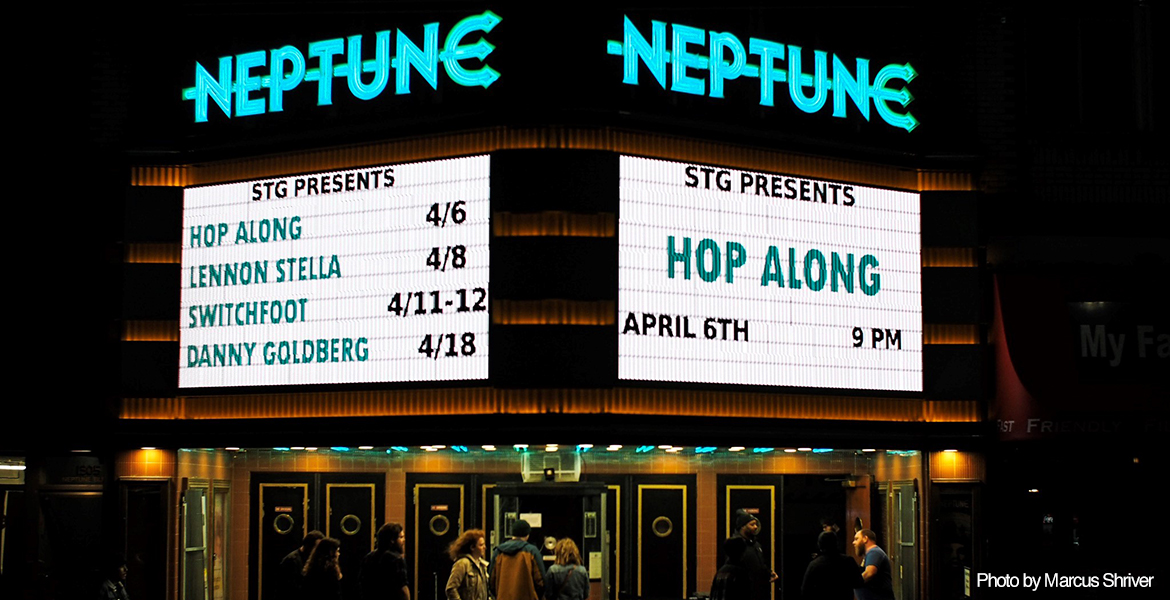 In 2018, STG launched a campaign to replace the 70-year-old Neptune marquee with a historically-accurate digital replica of the original design associated with the 1921 theatre opening. The aged marquee had outdated electric outlets, and the underbelly was rusted. Furthermore, the traffic on 45th Street compromised the safety of employees who were charged with changing the marquee letters at a frightening proximity to the busy thoroughfare. Check out the KING 5 news story here.

A complete history of the Neptune Theatre can be found in Seattle Theatre Group®’s Archive and Gallery, located on the 4th floor of the Paramount Theatre Tower at 911 Pine Street in Seattle, open Tuesdays and Thursdays from 10 am to 3 pm.