A historic instrument holds the keys to another era. 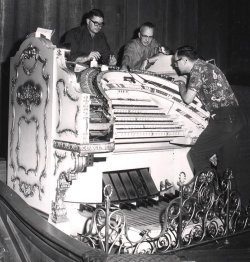 The Seattle Paramount Theatre is home to Wurlitzer opus 1819, one of eighteen “Publix 1” models built by Wurlitzer, and only three of which still remain in their original venues. (The other two are in the Paramount Theatre in Denver, and in the Alabama Theatre in Birmingham.) In fact, of nearly ten thousand theatre organs built by about three dozen companies between 1910 and 1940, only a few hundred still exist today (including many collections of salvaged parts); a recent survey concluded that only 38 theatre organs remain in their original venues in any semblance of original condition. STG is rightfully proud of what we think is simultaneously a magnificent musical instrument, an amazing machine, and a priceless historic artifact – truly a national treasure.

The Paramount’s organ was shipped from the Wurlitzer factory in North Tonawanda, New York, on December 23, 1927, and was installed and playing in time for the theatre’s grand opening, March 1, 1928. The console (the organ’s operator interface, the only part of the instrument ordinarily visible to the public) was decorated at the factory to match the theatre’s French Baroque architecture, including its ivory and gold color scheme and signature flower basket motif. The Wurlitzer opus list shows a price for opus 1819 of $46,500, which would be on the order of a million dollars today.

The sound-producing parts of the organ are installed in five separate rooms, or chambers, directly behind the beautiful grilles on either side of the auditorium. The organ’s tonal resources include 21 sets of pipes (21 ranks, in organ terminology), some of which are quite convincing imitations of the sounds of the orchestral instruments for which they are named, while others don’t imitate anything in particular. In addition to pipes, the organ contains nine tuned percussion instruments, ranging from a piano to sleigh bells, plus an assortment of drums, cymbals, other rhythm instruments, and sound effects, known collectively as “traps”. (One rank, one percussion, and a few traps have been added to the organ since it was installed.) The idea was to put the resources of an entire orchestra at the disposal of a single performer, who could play from a written-out score, could assemble selections from memory, or could simply improvise, in order to provide musical accompaniment for silent films. The Paramount’s organ is still used in exactly this way, in conjunction with Silent Movie Mondays.

The organ has been cared for since the 1950s mostly by volunteers from the Puget Sound Theatre Organ Society, a chapter of the American Theatre Organ Society, a non-profit organization devoted to preserving and promoting theatre organs and their music; in fact, the Puget Sound chapter was founded in conjunction with efforts to bring the Paramount’s organ back to life after two decades of neglect following the demise of silent movies. Beginning in about 2005, PSTOS has been carefully restoring the organ to like new (and in some respects better than new) condition, which involves taking everything apart and putting it back together, removing nearly a century’s accumulation of dirt, and repairing or replacing everything that is broken or worn out, using original materials and methods wherever feasible. As part of this restoration effort, the console was rebuilt in 2018 by the Crome Organ Company, a world-renowned expert in the field.

From the Seattle Times December 7, 2014 "The organ’s rich symphony of sounds envelops the audience, creating an orchestral feel one minute playfully adding special effects the next. It’s always in tune with the action on the screen, creating suspense, or humor. This is what these organs are built for, after all…the real star tonight is the Mighty Wurlitzer organ."

View an NBC Nightly News feature on the organ here!